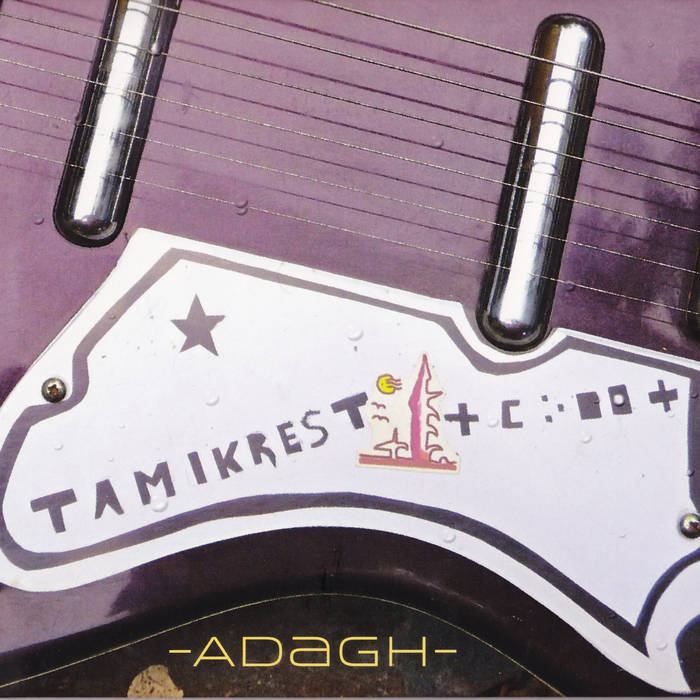 dac1 All the track are very god and very beautiful!TAMIKREST are a band with a big TALENT in MUSIC!Thank You!!!

“As far as I’m concerned, it’s Tinariwen who created the path,” declares Ousmane Ag Mossa, frizzy-locked leader of Tamikrest, in a pre-emptive strike against a thousand inevitable questions. “But the way I see it, if younger bands don’t come through, then Touareg music will eventually die. They created the path and now it’s up to us to walk down it and create the future.”

Ousmane was born twenty-seven years ago in a village called Tin-Zaouaten, a solitary speck squeezed up against Mali’s northeastern border with Algeria. It’s a remote marginal place. Or to put it another way: there’s distant, there’s remote and beyond both of those there’s Tin-Zaouaten.

To an outsider, the village would appear to be nothing more than a motley collection of one storey adobe and breeze-block houses, huddling together for protection against the burning sun, the black rocky hills and the lonely immensity of the surrounding desert. But to Ousmane, it’s home.

Like its ‘neighbour’ Tessalit, two hundred and fifty kilometres to the west, Tin-Zaouaten is blessed with a water table that lurks benignly just below the surface of the gritty soil. Dig a few metres and you can usually find water in abundance. That’s why Tin-Zaouaten, or ‘Tinza’ for short, is famed in the desert for its gardens and garden produce. Ousmane’s father Mossa was born a nomad out in the bush, but by the time Ousmane arrived he had settled in Tinza, making a living from growing onions, beetroot, carrots and dates, and selling them in the local markets.

In 1985 drought shook desert life to its core. The rains had failed for several seasons and the village was haunted by famine. “I was born in a time of calamity,” says Ousmane. “In the middle of dreadful events for the Touareg people. My parents knew so much hardship. Then when I was five years old the rebellion broke out. It was 1990, the year of war. I was a child, and I used to hide in amongst the rocks with the other women and children, just a few kilometres north of the village over the Algerian border. When I think of that time, it’s as if it’s all still happening in front of me.”

Thus Ousmane’s childhood was buffeted by the searing winds of recent Touareg history. The droughts of ‘68 to ’74 almost destroyed the animal herds and with them the ancient nomadic way of life of the Touareg. The drought of ’84 to ’85 almost dealt the final blow. Thousands of young men fled into exile in Algeria, Libya, Burkina Faso and beyond. That’s where the modern Touareg guitar style of music was born and then nourished by anger, homesickness, frustration and dreams of a better life. It was this generation of Touareg men, known as the ishumar, who returned to Mali and Niger in 1990 to rebel against the callousness, corruption and arrogance of the governments in the distant capitals of Bamako and Niamey.

At first Ousmane just listened to traditional Touareg music at home, and the newer guitar music on battered old cassettes. “I well remember hearing my first Tinariwen songs. I was about five. After the death of my mother, my father was obliged to take me to live with my grown-up sister. One morning I was sitting in front of the house and this guy walked by singing a song by Inteyeden called ‘Imidiwan Kel Hoggar’ (‘My Friends the Hoggar People’). It went straight into my brain…ha ha ha.”

A few years later Ousmane began to play the guitar himself, and write songs. He was attending a school in Tinza called Les Enfants de l’Adrar, set up by a French NGO and a local man turned community leader called Hama Ag Sid Ahmed. At the end of every school year the children would create and perform musical plays about pressing themes like ignorance, drought, education and culture.

Hama bought the school an acoustic guitar, and Ousmane adopted the instrument. With his constant friend Cheikh Ag Tiglia, he would write songs and perform them at the school shows. He learned the Tamashek guitar style by listening to a particular cassette which Tinariwen’s leader Ibrahim ‘Abaraybone’ had recorded in Algeria back in 1998.

In 2002, events once again undermined the tenuous calm and stability in Tinza. The village was home to one of the southern desert’s most infamous freedom fighters and warlords, Ibrahim Ag Bahanga. For this reason it became a military no-go zone. Ousmane’s father left to live with his eldest sons in Libya, and both Ousmane and Cheikh went south to Kidal

Kidal is the capital of the far north east of Mali, a region known as the Adagh des Iforas (‘The Mountains of the clan Iforas’). With its wide sandy streets and dispersed one storey earthen houses, Kidal has the feel of a frontier town. For the Adagh Touareg, it’s where it all happens.

Ousmane and Cheikh played the guitar and sang in hidden corners of Kidal, around a fire, drinking bittersweet Touareg tea with their friends. Their reputations grew very slowly, steadily, without wild leaps or fanfares. After a while they heard that a local cultural centre called the DDRK or ‘Maison du Luxembourg’, founded by the Duchess of Luxembourg who had fallen in love with the town when she visited it in 2001, was offering music classes. The teacher turned out to be Juhan Ecaré, a musician from Ivory Coast.

Then this French theatre troupe called La Calma arrived in town and enrolled over fifty young people to perform a massive theatre piece featuring sketches about a host of local issues. It went down a storm in January 2006 at a local festival called ‘The Saharan Nights of Essouk’. Although Ousmane didn’t take part in the project, claiming disinterest in theatre (“I’m a musician…theatre’s not my thing”), Cheikh went along and played with a local percussionist called Aghaly Ag Mohammedine and a bass player called Ibrahim Ahmed, aka ‘Pinnochio’ or ‘Pino’ for short.

On their return, Pino proposed that they form a proper band and record a demo at a small studio, which had been set up at the Maison du Luxembourg. They also decided that they needed a name, and agreed on ‘Tamikrest’, which means the knot, the junction, the coalition, in Tamashek, the language of Touareg. “Each of us came from a different place, a different zone,” explains Ousmane. “Cheikh and I from Tinza. Aghaly and Mossa Maiga from Kidal. Pino from Gao. But we found each other and we had the same ideas, the same intentions. We were like a coalition.”

On the 23rd May 2006, the army garrison in Kidal was attacked by a new Touareg rebel movement called the Alliance Démocratique pour le Changement (ADC). “It was a hard time for me,” remembers Ousmane. “I woke up early that morning and discovered that the town had turned into a nightmare. Those who wanted to join the rebels had already done so. But, in general, that wasn’t the choice of me and my friends. Because we’d never been in the army. We were musicians, not people who carry arms.”

By the end of the year a fragile peace had been restored, although Tinza’s recalcitrant son Ibrahim Ag Bahanga refused to compromise and remained on the run with his own splinter militia. Tamikrest performed at the peace Forum in March 2007, when the Touareg rebels met with the Malian government and thousands of community representatives in Kidal to map out a way forward.

The group were developing their style and their fan base, which consisted mainly of Kidal’s younger generation. They knew the Tamashek guitar style intimately, but they were also deeply into rap, metal, Maghrebi pop and afro-disco music from Ivory Coast. They had new tastes, new desires, new ambitions and Tamikrest was their band.

Pino was quite a mover and shaker. In late 2007 he contacted Manny Ansar, the director of the now world-famous Festival in the Desert and clinched a gig for Tamikrest. The band found the money to transport themselves the 600 miles eastward to Timbuktu. In the silky dunes of Essakane they met Dirtmusic, a group of rock’n’roll veterans from the USA and Australia. It was one of those meetings fashioned by fate in the workshops of destiny.

Chris Eckman of Dirtmusic remembers the meeting thus: “On our first morning in Essakane we woke up hearing music, so we went across the sand to the tent opposite ours and that’s where Tamikrest was playing. Chris Brokaw grabbed his dobro and headed over, then Hugo and I eventually did the same and basically for three days we didn’t leave.”

Once again music overflew all barriers of language, culture, style, shyness and reticence. The friendship formed at Essakane grew in the following months and lead to an invitation by Dirtmusic to come to the Malian capital Bamako to make an album, and contribute to Dirtmusic’s own oeuvre. After another epic journey of 1,200 miles, by car and bus, Ousmane, Aghaly and crew entered their first professional studio and ‘Adagh’ was born.

“It felt very natural to play with Dirtmusic,” asserts Ousmane. “I’ve always appreciated all kinds of different music and it was such a pleasure to play with a different kind of band. Music isn’t something you study; it’s something you learn with your ears. I’d been listening and playing along to Bob Marley, to Marc Knopfler and Dire Straits, to Tinariwen for years. We’d been listening to so much international music and that’s why the marriage with Dirtmusic worked.”

The end of 2009 finds Tamikrest on the cusp of the world and the next chapter in their great adventure. “This opportunity to go to Europe feels like a big responsibility,” says Ousmane. “I feel like someone who’s done this exam and is now waiting for the result. We’ve already achieved quite a bit, but the hardest is still ahead.”

One thing is certain: Ousmane is clear about the band’s mission. “The situation of the Touareg is very difficult right now,” he declares. “Even before I played the guitar and started recording, I had this ambition to be a lawyer or you might say, an ‘advocate’. I wanted to be capable of expressing the hurt I felt in my heart, and speak out about the situation, even at the United Nations. Because we’re a people who don’t have journalists, we don’t have advocates. But it was only later that I realised that a musician can play that role.”

“What is the weakest part of any nation or people? It’s ignorance. We are stuck in our ignorance. I see the world changing, racing ahead, and leaving us behind. And the only thing that is holding us back is our ignorance. As artists, it’s our duty to make our problems known to the world, to sing songs about the nomadic life, about our traditions and culture. But above all, revolutionary songs, about what we see, about what the government is doing to our people, which makes no sense to me.”

There it is…Tamikrest, the knot, the coalition, the future.