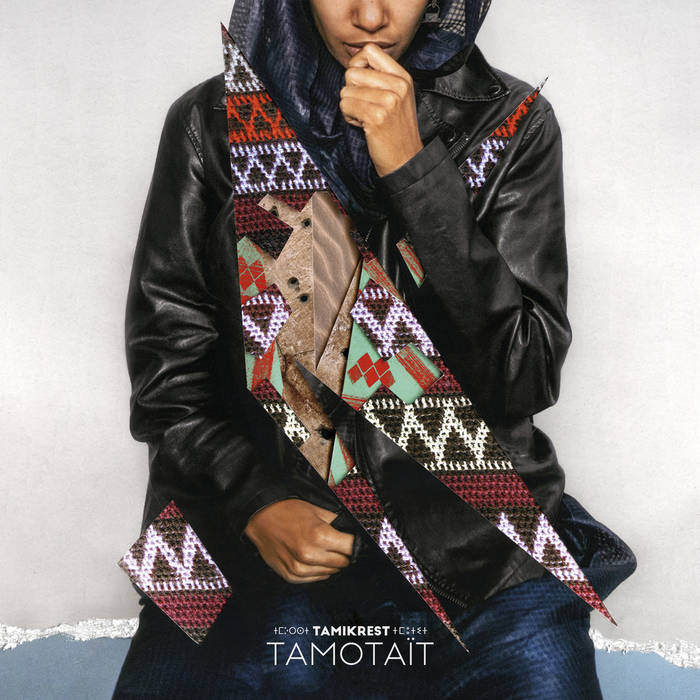 frohmueller It is so gentle. A gentle rocking for my soul. Favorite track: Timtarin (feat. Hindi Zahra).

Carsten Pieper This May 1 let me complete my studio album collection of my favorite Desert Rock / Touareg band. They never disappointed me, so this had to bought, too!

Tamikrest return with a vivid, irrepressible rock and roll statement. Their most powerful album since 2013’s wildly acclaimed Chatma, Tamotaït finds the band not only turning up the volume, but also sharpening their ruminations on the state of the Sahara and the world beyond. Features acclaimed Moroccan singer Hindi Zahra and Japanese traditional musicians.

Sometimes music is more than the notes played or the words sung. Sometimes it’s a spirit that catches fire and burns with a dangerous, dazzling flame. On Tamotaït, Tamikrest’s fifth studio album, the music blazes bright and long. With the political situation so volatile and desperate in the Saharan ancestral lands from which Tamikrest comes, this is more than an album. This is resistance.

But in there, too, is the dream of the future. “The definition of the album is there in its title,” explains singer, guitarist and songwriter Ousmane Ag Mossa. “Tamotaït means hope for a positive change.”

Change as in an end to the fighting that’s plagued northern Mali and the wider region for the past several years; change as in the chance to prosper within their own homeland – Azawad – a proto nation that the nomadic Tuareg (or Kel Tamasheq as they prefer to be called) briefly possessed in 2012. It is music formed from thoughts, dreams, inspiration, and above all, collective experimentation.

“We are a band and when we play together everyone brings their way of playing. For the compositions, some pieces start from a riff, another part from a melody or a rhythm and each musician adds his ideas afterwards. The idea was to keep a common thread that comes from Tamasheq music and to take it through different worlds, whether they come from our influences or from our encounters during our travels.”

That common thread is passion. You can hear it from the very first note of the opening cut, “Awnafin,” where defiance powers the vocals, all the way to the floating, airy melodies that close “Tabsit.” It’s assouf, music forged in exile. Because of the toxic regional conflict, for most of the last decade the founding members of Tamikrest have not lived in Kidal, Mali, the desert crossroads town where the band began in 2007.

Yet exile can also mean the hope of return, and on “Amzagh” and “As Sastnan Hidjan,” the two tracks the group sees as pivotal to understanding the themes of Tamotaït, Tamikrest sing of the possibilities that lie ahead for the Kel Tamasheq people.

“‘Amzagh’ is a song that describes the people of today and reflects about the people of the future,” observes percussionist and singer Aghlaly Ag Mohamedine. “What are we doing right now and how this will influence the future.”

And “Sastnam Hidjan” peers into one of those futures: ‘It’s about revolution,” he says. “A revolution in the Tamasheq culture. We want to fight for our culture and tradition. We are not taking the oppression for granted. We stand and we fight.” That’s more than lip service. You can hear it in the way the music builds and builds, the dual, intertwined guitars of Ag Mossa and Paul Salvagnac relentless and insistent, until it finally all boils over. The blaze burning bright.

Yet fire does more than cleanse. It also brings light and warmth and comfort, and its glow fills the beautifully aching “Timtarin,” where the band is joined by an ideal collaborator (Salvagnac played in her band for several years), renowned Moroccan singer Hindi Zahra.

“We invited her to play with us at one of our concerts in Brussels,” Ag Mossa recalls. “We hadn't rehearsed; she just came on stage and it all happened very naturally. We really liked what she brought to our songs and invited her to come and sing on other dates. Each time, we managed to create something very natural and spontaneous. She has a remarkable voice and she’s a very good improviser. It seemed natural to us for her to sing on the album. We recorded without any rehearsal, and the first take was the right one.”

Tamotaït is the most expansive and adventurous album that Tamikrest have made, exploring every corner of their sound. There’s even music they made far from the Sahara – in Japan. On tour there, Ag Mossa had been very taken by the sound of their traditional instruments.

“I decided to go back, to know more about the culture and music. During my visit, I composed some songs on one of the remote islands of Japan. And since the songwriting of this album started in the desert and ended on the islands in Japan, we believed that it was a good idea to reflect this on the album as well.”

Tamikrest’s plans to record there were almost derailed by a typhoon. But one track does appear on the album: the final cut, “Tabsit,” with its atmospheric, gossamer melody. The shamisen and five-string tonkori of guests Atsushi Sakta and Oki Kano glide around the guitars to create a piece where the desert truly does meet the Rising Sun.

Most of Tamotaït, though, was recorded in rural France, working with producer David Odlum (Glen Hansard, Gemma Hayes, Tinariwen), stepping up from his mixing role on the band’s 2016 release, Kidal.

“We wanted to make a modern album but with vintage sounds, and we fell in love with his studio, Black Box, when we visited a few years ago,” Ag Mossa explains. We wanted to work as much as possible on the sounds beforehand and not leave everything for the mixing. So we spent time with him, finalising the arrangements before we began recording, and he also helped us a lot in the choice of amps and microphones.”

The Odlum effect is especially apparent than on “Anha Achal Wad Namda.” Just listen for that moment where the taut rhythm section of Ag Mohamedine, Cheikh Ag Tiglia (bass) and Nicolas Grupp (drums) kick in and the track lifts off to the stratosphere with a full-throated roar. It’s pure, perfect rock bliss, a reminder of how music can speak with such a towering voice – and why a decade into their acclaimed career, Tamikrest have become one of the best rock’n’roll bands in the world.

That’s a big title to carry. But Tamotaït proves they’re worthy of it. This album is what rock’n’roll can be, what all music can be. Music as a weapon of hope. Songs as a vessel of truth.