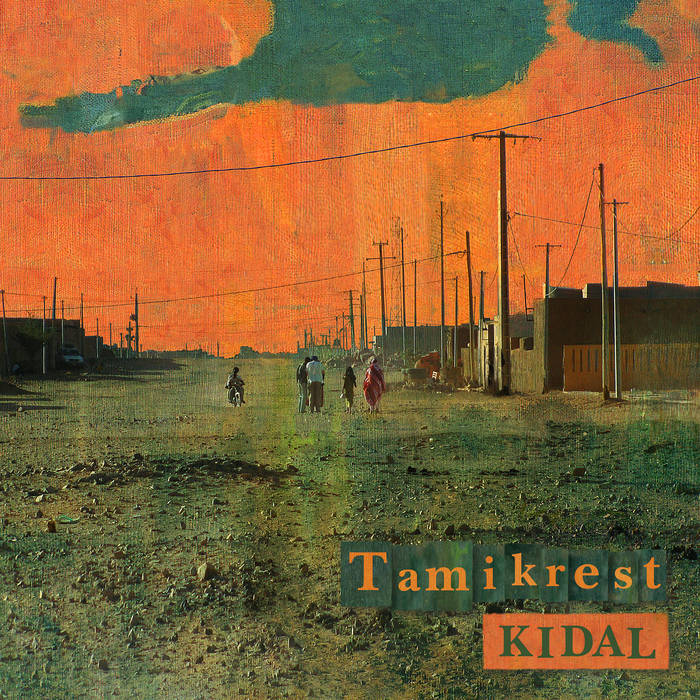 Carsten Pieper I think this is their fourth studio album and by getting this, I have them all. I simply love this kind of desert blues. Haunting melodies, hypnotic rhythms - wonderful music! Favorite track: Wainan Adobat.

All around Kidal, the Malian desert stretches in every direction. Endless horizons of rock and sand, barren and parched. This is the southwestern edge of the Sahara, the home of the Tuareg people, and the town of Kidal is one of their main cultural centres. Fought over, conquered and re-conquered, it remains the symbol of Tuareg defiance and hope, the spiritual home of a dispossessed people.

It is also the town in which Tamikrest first came together as a group, and on Kidal, Tamikrest’s fourth studio album, the band pays homage to this place that’s nurtured them and their people.
It’s a cry of suffering and the yell of rebellion. It’s power and resistance. This is pure Tuareg rock’n’roll.

“I wrote most of the songs when I was in the desert,” explains singer and lead guitarist Ousmane Ag Mossa. But it had to be that way, he says. “If you want to talk about the situation, you really need to live it.”

From the simmering intensity behind the opener, “Mawarniha Tartit,” through the sweet slide work of second guitarist Paul Salvagnac on “Atwitas” to the full-blooded roar on “Adoutat Salilagh,” this is a band fired with passion for their people and the centuries of injustice they’ve endured.

“Kidal talks about dignity,” Ag Mossa says. “We consider the desert as an area of freedom to live in. But many people consider it as just a market to sell to multinational companies, and for me, that is a major threat to the survival of our nomadic people.”

The music on the album has deep roots in the Tuareg tradition, but it burns with a brilliant, modern flame. “My love is my country, my ambition is freedom,” Ag Mossa sings on “War Tila Eridaran,” a proud statement of intent. “No being must live in oppression, ignominy, and eternal repression.” It’s the sound of a people who endure their struggle every single day. To them, the idea of what Kidal represents is almost as important as the place itself.

The Tuareg have always been nomadic people, their lives in motion across the desert, sometimes taking with them only the bare essentials. But for one brief moment they possessed a home after the Tuaregs rose up in 2012 and declared the independent state of Azawad in the northeast of Mali. It lasted less than a year, as first al-Qaeda conduits swept in from the north, imposing Islamist rule, and then the French military arrived to liberate the area - once again leaving the Tuareg with little or no chance for self-determination. But the dream remains, still trapped between governments and the greed of global corporations.

“Kidal, the cradle of all these uprisings, continues to resist the many acts perpetrated by obscure hands against our people,” notes band associate Rhissa Ag Mohamed. “This album evokes all the suffering and manipulation of our populations caught in pincers on all sides.”

The songs on Kidal evoke a long history. And for all the electricity, as Ag Mossa observes, “It’s very traditional if you go deeply into what I’m playing.”

Everything here is focused. Everything burns. Ag Mossa punctuates his lyrics with inspired bolts of guitar. Even an acoustic song like “Tanakra” maintains a luminous edge.
But from their debut in 2010 onwards, Tamikrest have had the fire in their music, and it’s built with each release. Chatma, their third disc, hit number one on the European World Music charts and was acclaimed as one of the Albums of the Year in publications across the globe. Songlines magazine gave them the Best Group Award, while their live performances showed a band whose sound sent sparks flying.

With Kidal, that blaze is roaring. Recorded in Bamako, Mali in the summer of 2016, the album was produced by Mark Mulholland (Afro-Haitian Experimental Orchestra) and mixed by David Odlum, who received a Grammy for his work with Tinariwen. It’s an album that’s taken two years to make, Ag Mossa says, “because we share the same difficulties of our people.” And the songs here mirror their joys, their pain and their unwillingness to accept things as they are.

There’s a raw beauty in Tamikrest’s rock’n’roll. It’s there in the driving, insistent groove that powers the songs, the lean, snaking bass lines and the guitars that twine and twist around the melodies, and the utterly natural musical blending of Sahel Africa, the Maghreb, and the West – a reflection of influences as diverse as Pink Floyd, Rachid Taha, and flamenco. Yet the Sahara, and the people who live there, is always firmly at its heart.

“This music was founded on a very precise cause, the Tuareg cause,” Ag Mossa told journalist Andy Morgan in 2013. They might be threatened on all sides, but they won’t give up, and this album celebrates who the Tuareg are, the Kel Tamasheq (“those who speak Tamasheq”), the keepers of an ancient and endangered cultural voice.

Tamikrest’s new album is the music of defiance, of hope. It’s rock’n’roll from the Sahara, the sound of the Tuareg dream, a dream that will be renewed again, in their ancestral town: Kidal.